I had a few days in a row without tears. Up to, and including, my second round of chemo. Then my hair fell out on Friday. Well, to be honest, first a handful of my pubes came out. Then I reached up to do my hair and it started coming out. Handful after handful after handful. Until the sink was overfilled with my hair. Why does cancer have to be so damn dramatic?

At first I was fine. Mac and I went to the wig store and picked out a couple of wigs. Malachi came over with clippers to shave the rest of my head. Belinda came over and gave me a headwrap refresher and she and Erin helped me pick out two wigs that were a little less crazy than the ones Mac and I had chosen. 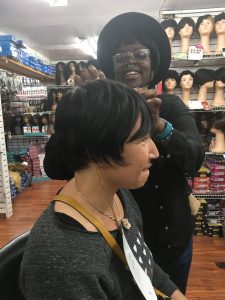 My head looks gnarly. I have a few swaths that are still completely smooth from the cell death hair loss following brain radiation. Then the rest of my head is more stubbly. And, of course, there’s a huge scar taking up a good amount of real estate. 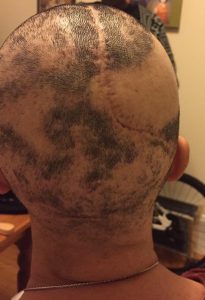 It feels stupid to say it, but the level of anxiety I have about the possibility of my eyebrows falling out is through the roof. It’ll probably happen. So there’s that.

Everything feels extra fraught right now. Like I’m convinced I’m going to die next week. Mac helps keeps me grounded in the present. He reminds me of a more full truth of each moment.

A truth is that today during physical therapy I got to lay on a mat and get stretched out while also looking over at a smiling Mac and a sleeping support dog. There’s nothing wrong with that.

Another truth is that I can’t feel my left leg in space. So every 30 seconds on the exercise bike I would notice that my foot wasn’t even on the pedal anymore. But each time, I lifted it back up and placed it back where it belonged.

Another truth is that 3 months ago I was in a hospital bed with a hemorrhaged brain tumor and the best option for going to the bathroom was simply to pee on myself and then call the nurse to change my pee pads. Today, I am walking around without even a cane (most days). Even on the worst days of chemo, I can get myself right to the bathroom on time and on my own.

I guess that’s to say I’m trying to widen my view a bit. And take more control of the narrative. It’s been a lot worse. It’s going to get worse again. Today, though? I guess it’s just fine.